Twice we were attacked by American planes. The first time was at night. An American P-61 “Black Widow” night fighter saw a large amount of troops on the ground and thought we were Germans. The second time it was daylight and we were attacked by an American P-47 “Thunderbolt.” There was an ammunition train in front of us. When he attacked he killed two German guards.

During the attack, we broke out of the rail cars into a field where we formed the letters “POW” with our bodies.  For the rest of the day we had air cover. American POWs had the USAAF flying air cover, protecting us from both Germans and American.

I was born in Canada in December, 1921. My father and his brother came to Canada from Sweden around 1912-14 and homesteaded two “quarter sections” of land and raised wheat. After a few years my father went back to Sweden, married my mother and brought her to Carrot River, Saskatchewan. The homestead was a mile from the nearest neighbor.

A few years after I was born the bottom dropped out of the wheat market and they were forced to sell the land they worked so hard improve.

My uncle and my father heard of work in California at a town called Westwood, a lumber mill town in Lassen County. Westwood was a great deal like Tuolumne was, a company town. Westwood was owned by the Red River Lumber Company from Minnesota.

Westwood was a good place to live. It was during the Depression so times were hard. But there was always some kind of entertainment going on. Music was very important in our lives. Our little high school had both a band and an orchestra, and I played in both. I played both the clarinet and saxophone. I also played with some friends in a group hired for parties and dances.

Westwood was supposed to have been a temporary stop, a place to earn some money and move onto a farm. The temporary stop lasted from 1924 to 1940, when I graduated from high school. By then with part of the world involved in conflict, it was obvious that we would be in “it” sooner or later.

Right after graduation I found work as a forest firefighter, and in September I went to work in the mill. My wage was $5 a day.

In 1941 we moved to Oakland, California and my father found work at Loop Lumber Co. in Alameda.

I had an interest in flying and was taking flying lessons at Oakland Airport, lessons that would do me no good in my military years. I arrived for my lesson one day and found the airport closed. The Japanese had attacked Pearl Harbor and my life changed drastically.

Sometime in January, when my friends and I went to join the Navy, I was told “sorry, you are a Canadian citizen and cannot enlist in the U.S. Navy.” Actually he was in error and I could have enlisted.

Out of all my friends I was the only one who saw combat. That’s because in October I was drafted into the U.S. Army and despite having flight time under my belt, the Army felt my true calling was in the Infantry!

The Army at the time was fighting in the North African Desert. Because of this we were sent to California’s Mojave Desert for seven months of desert warfare training. We were sent from the desert back to Camp Forrest.

I got a furlough home and because of my low pay I had to sit up in the train from Chicago to Oakland. I made friends with some sailors, and we combined our efforts which made it bearable.

In November 1943 we were in Camp Kilmer, New Jersey. After crossing the rough Atlantic onboard the SS Durban Castle, we landed at Belfast, Northern Ireland on December 6, 1943. We went on a train to an estate six miles south of Newtown Butler, just a mile from the Republic of Ireland, an independent nation that had declared itself neutral.

This fact was not lost on some guys who figured to sit out the rest of the war by going to Ireland. However neutral the country was, the Irish police just brought them back.

We had a parade and review for Generals Eisenhower and Patton. Patton’s speech was full of “colorful phrases.”

We landed in France on July 4, 1944. I walked ashore on a long causeway on Omaha Beach. We spent the next two weeks preparing for combat. Our first day of combat was a complete fiasco of missed and no communication. At the end of the day we had suffered 51 percent casualties and I was promoted two ranks to Sergeant.

After hard fighting in the hedgerows of Normandy we took part in the Battle for Brest, a major port city. After Brest we were sent to Luxembourg after being in what was known as a “quiet sector.” We were moved north to the Hurtgen Forest just inside Germany. We traded places with the 28th Infantry Division, which had taken a beating in the Hurtgen Forest and were taking over out in the quiet sector.

A couple of weeks later the Battle of the Bulge broke out as the Germans drove through the so-called quiet sector we had just left. But we were now in the Battle of the Hurtgen Forest. This was a very rough fight of which at first there was no clear objective. The capture or destruction of some hydroelectric facilities became the de facto objective.

On February 23, 1945 we conducted a night assault across the Roer River. Once again we jumped off early. After crossing the river and getting pulled out of the mud on the far bank we advanced inland. We lost a lot of weapons, mortars and machine guns in the river. 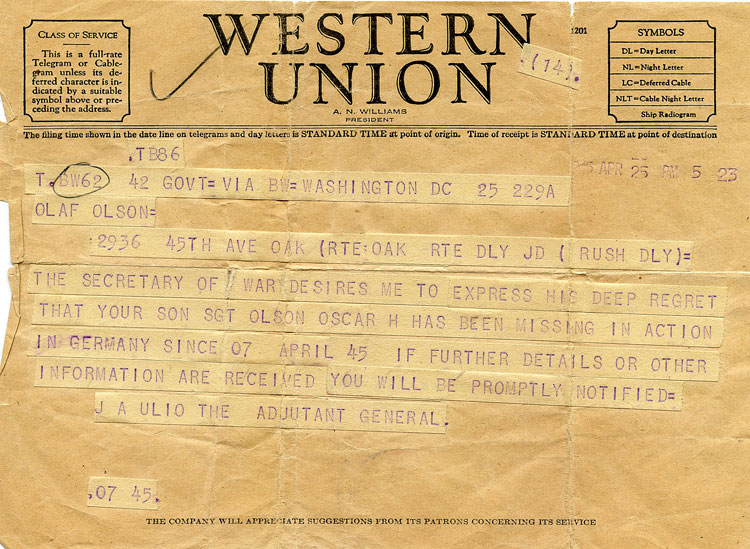 Telegram from the Army to Oscar’s parents dated April 25, 1945

After crossing the river we sent the boats back and advanced inland where we dug in waiting for orders. It was here that my life changed again. Because of poor communications we did not get the order to fall back. When we finally did move we ran into a large group of Germans and were taken prisoner.

I was a prisoner of war for about five to six weeks when we were liberated by American troops. My time as a POW was spent mostly on the move. We did spend one week in a camp. During that time we were accidentally strafed by American planes.

We also had to dig victims out of bombed buildings. Most of the victims were dead, but once we found a German soldier and a little girl. Both were alive.

We were moved many times by the Germans, but the end of the war was near and they knew it. The German Army was retreating and they were taking us with them. We stayed in a couple of POW camps but mostly moved by foot and rail.

Twice we were attacked by American planes. The first time was at night. An American P-61 “Black Widow” night fighter saw a large amount of troops on the ground and thought we were Germans. The second time it was daylight and we were attacked by an American P-47 “Thunderbolt.” There was an ammunition train in front of us. When he attacked he killed two German guards.

During the attack, we broke out of the rail cars into a field where we formed the letters “POW” with our bodies.  For the rest of the day we had air cover. American POWs had the USAAF flying air cover, protecting us from both Germans and American. 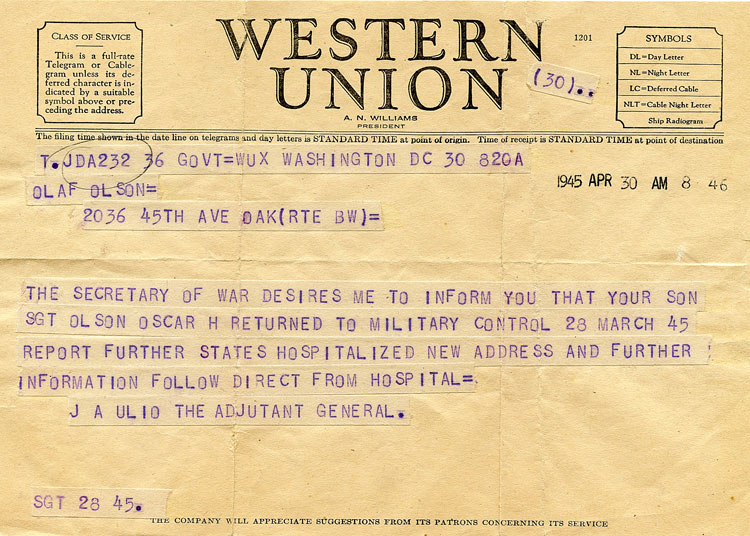 Telegram from the Army to Oscar’s parents dated April 30, 1945

One night we were sleeping in a barn with the Germans. We woke in the morning to the sounds of tanks. Being the ranking NCO, I checked and was happy to see American tanks. Our German guards were hiding in another building so we made POWs of them and turned them over to the tank company.

I was flown to France and went aboard the passenger ship SS George Washington. Crossing the ocean I came down with something I later suspected to be Hepatitis A. I did not want to report as sick because I would be put in the hospital which would delay my homecoming.

I took the train to California during which the illness passed and never bothered me again.

I spent some time in rehabilitation at the Miramar Hotel Resort in Santa Barbara, and also at Camp Beale in Marysville and at Camp Roberts in San Luis Obispo.

In November 1945 I was discharged from the Army.

I never have been one to dwell or reflect. There was a job that needed to be done, and it fell on my generation. 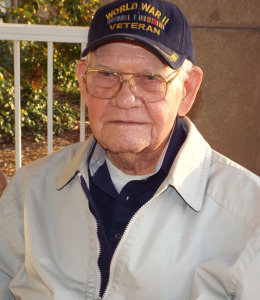 In 1951, having been laid off from the mill, I took the exam for airport serviceman at the Oakland Airport. We handled aircraft fueling and Crash/Rescue.

Interestingly enough, in 1979 I married Lillian a divorcee, who had two grown daughters, one of whom was married to my son. In other words, I married my son’s mother-in-law! 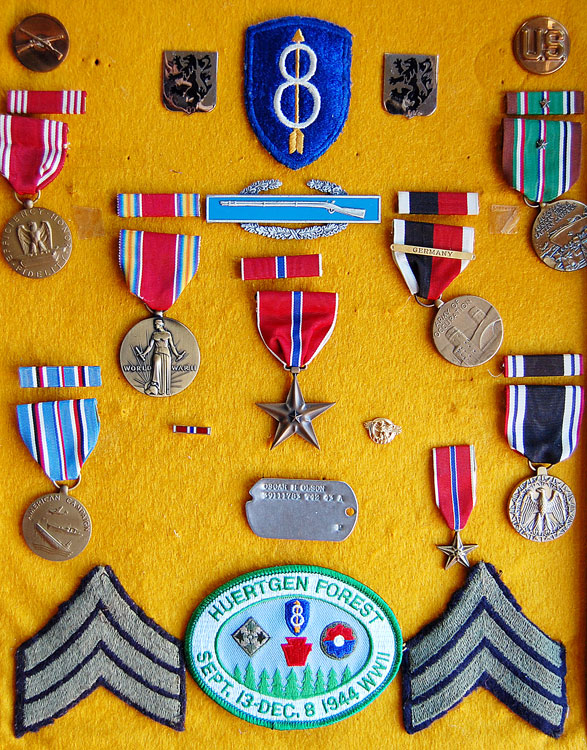 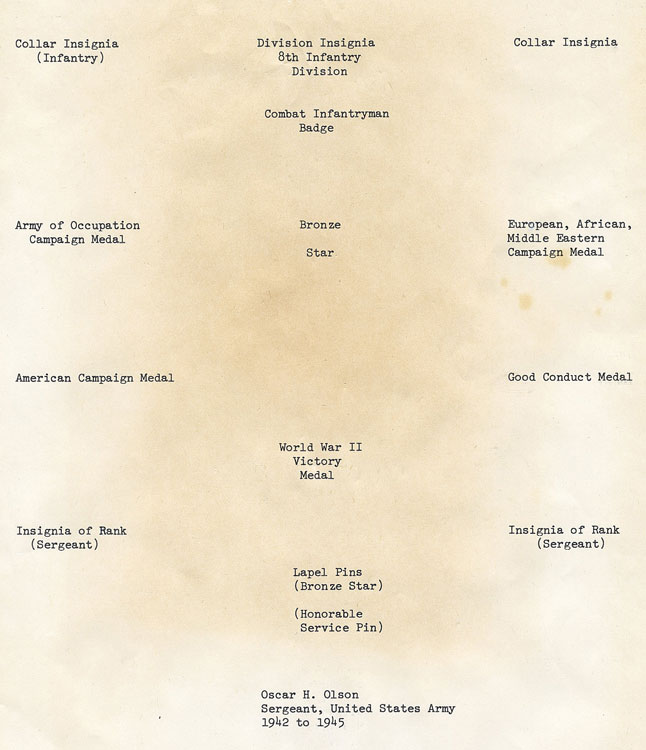 Legend for some of the medals above